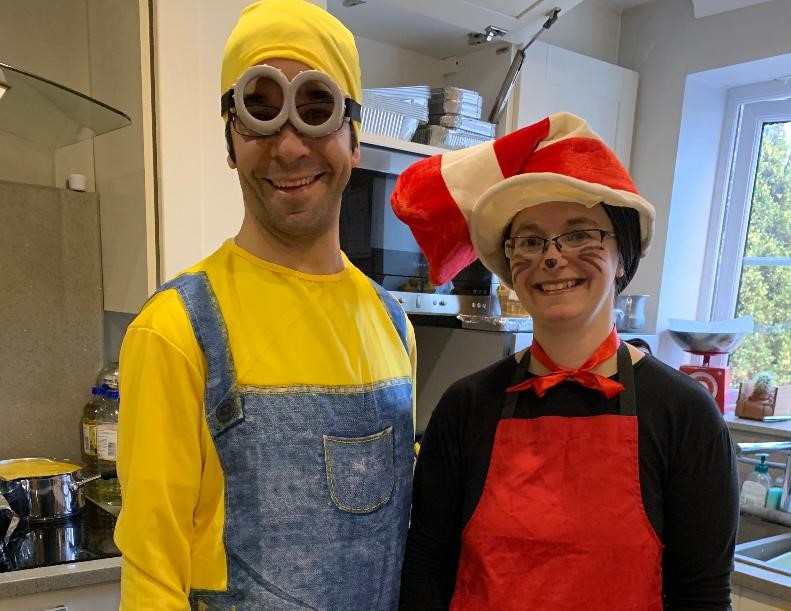 There was something different about our Purim celebrations this year. Yes, we had the Megillah, recited, as has become traditional, by Jonathan Gorsky, apparently without taking a breath;  yes we had hamantaschen; yes, we had a children’s party, complete with gragger-making and a fancy dress competition  (won by sisters and cheder pupils, Orah—the mermaid – and Amalia -the fairy princess  – Levy Yitshak);  yes, we had a tasty dinner for the grown-ups, admirably catered by Rebbetzin Alli. But what was this? A big, black, tail-wagging Labrador called Nemo, sat right in the middle of the shul—where on earth did he spring from?

Where he sprang from, as we discovered during the course of the evening, was as the guide dog and constant companion of our guest, Louise White. Louise had been invited to talk to us—both adults and children in separate presentations—about how she had lost her sight at the age of only 27 after developing diabetes at an unusually young age, how she copes, and how she manages her life, even going on treks and climbing mountains!

Speaking unemotionally and with considerable humour, she told of the numerous operations she had had to undergo, some in an effort to save her sight, and others such as the convoluted kidney and pancreatic transplants required to remedy the failure of her own organs, not to mention the dialysis she needed between the transplants.

Though initially reluctant, never having been a ‘doggy’ person, she explained how she was persuaded to take on a guide dog, and how she and her first dog Pippin had learned to work and walk alongside each other. Eventually, the success of their partnership encouraged Louise to think about how she could continue to make something of her life in spite of her disability.  Her first aim was to get fit again, which she achieved through many sessions at the gym and the pool. She also stretched herself mentally by attending classes and lectures at the Jewish Learning Exchange.  Soon, she felt confident enough to extend her scope by fund-raising for charities such as Jewish Blind & Disabled, the British Heart Foundation, and the Juvenile Diabetes Research Foundation, among others;   among the sponsored feats she has accomplished, with the aid of good friends were climbs in the Himalayas, in the Atlas Mountains in north Africa, and up Mount Snowdon.

Nemo was, of course, a big hit both with the children and the grown-ups, earning himself an abundance of stroking and petting, and so even-tempered that even the sudden salvos of noise produced during the Megillah-reading whenever Haman’s name was mentioned did not faze him in the slightest.

All in all, Louise’s story was a truly inspiring tale of triumph over adversity appropriate to the day when we celebrated the victory of Queen Esther,  her uncle Mordechai and the Jewish people over those who wished them ill—a Purim that all of us present will remember for a long time.