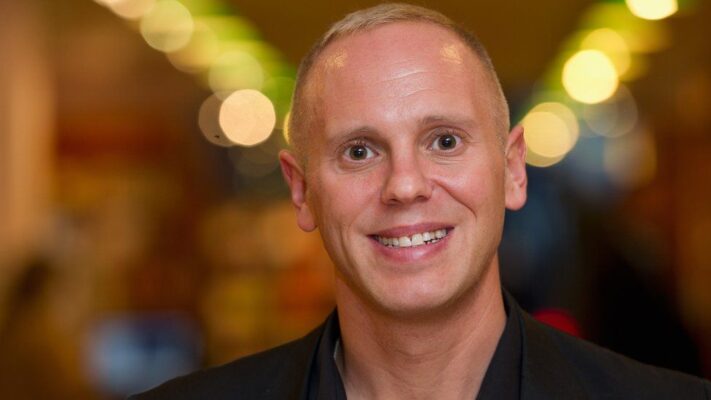 “You can ask any questions you like” said ‘Judge’ Rob Rinder at the outset of his ‘In Conversation with….’ session hosted by St Albans United Synagogue, the second in a series of candid chats between celebrity guests and shul chairman, Elissa Da Costa-Waldman. His remark was addressed not just to his interviewer but also to his audience in general, and they certainly took him at his word. The questions raised ranged from ‘if you could follow your friend Benedict Cumberbatch into the Marvel film franchise, which superhero would you like to be?’ to soliciting his insider views on same-sex partnerships in ‘Strictly Come Dancing’, to whether he experienced much trolling after the recent TV showing of his two-part series, ‘My Family, the Holocaust and Me’. The answers, incidentally, were ‘I don’t know’, ‘ambivalent’ and ‘emphatically not’.

Like the first, this event took place on Zoom, enabling not just St Albans shul members but viewers from all over the country to enjoy the occasion. Before the lively Q&A session, which could have gone on and on, had time permitted, Rob and Elissa began by discussing his early life and education—a reminiscences-fest which teetered on the brink of becoming a family and friends reunion, thanks to the presence in the audience of Rob’s mother, Angela, as well as such SAUS members as Rob’s honorary ‘auntie’, Ruth Jacobs, his old schoolfriend, Daniel Vangeen, and Elissa herself, a friend of the Rinder family since way back when (evidenced as she screen-shared a photo of Rob dancing with her daughter when they were both aged five!).

Also revealed during the ensuing exchanges was the fact that though he had toyed with the idea of becoming an actor – until he realised he wasn’t quite good enough – and going into politics – he had graduated from Manchester University with a double first in history and politics, it was his prowess in debating that ultimately pointed him in the direction of the law, eventually becoming a specialist in cases involving international fraud and other financial crime. Laugh-out-loud entertaining and serious in equal measure, and peppering his conversation with many Yiddishisms (no mistaking that this was a good Jewish boy), he was as much at home discussing the ins and outs of a legal career with fellow-barrister Elissa, as delivering an amusing description of how he stumbled into television, first by writing scripts, and then accepting an invitation to launch ‘Judge Rinder’ in emulation of the popular US ‘Judge Judy’ TV show.

Telling the human stories of the Holocaust was very important to him, he said, and he was delighted to learn that his Holocaust programme scored the highest ratings of all that night’s viewings. “Being a celebrity gives you a platform,” he said, “and I want to make the most of it.” Future plans include making some in-depth programmes about Israel, he added.

Our Zoomed Holocaust Memorial Day – truly “a light in the darkness”