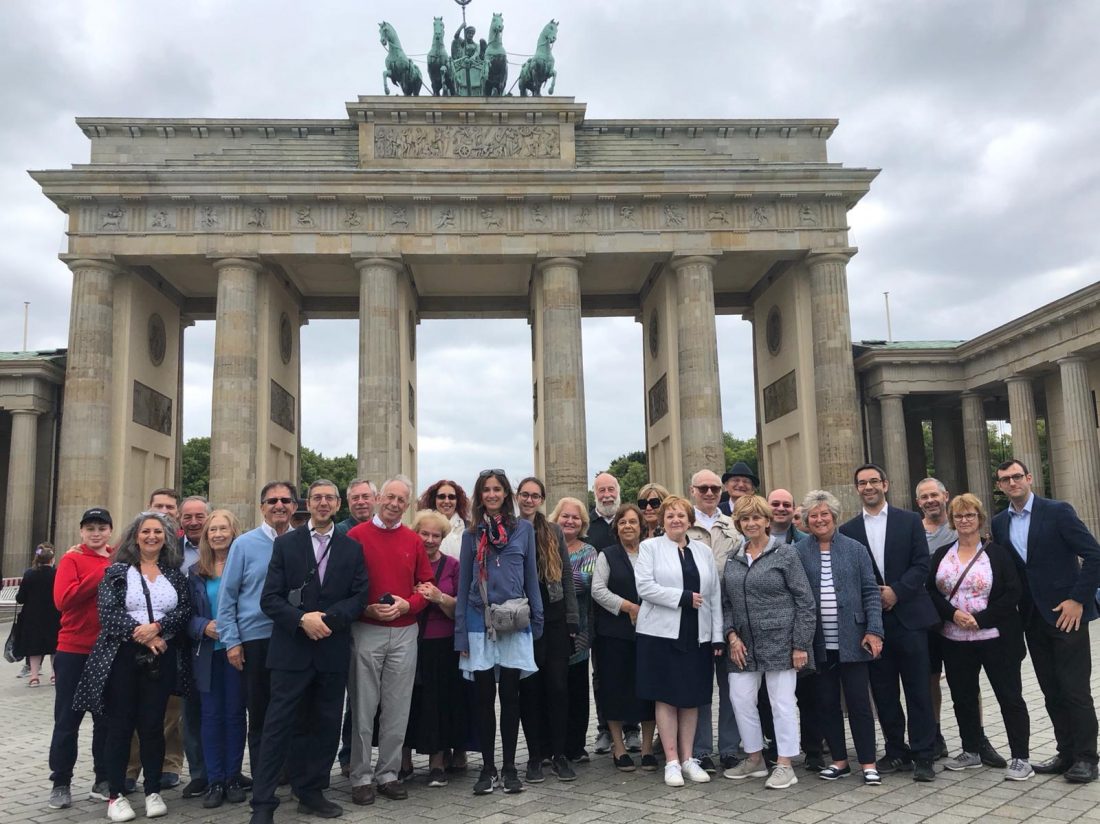 Following the incredibly successful Shul visit to Poland about two years ago, members of St Albans US teamed up with a party from Hampstead Garden Suburb Synagogue and embarked upon a similar trip to Berlin, in mid-July. The two day visit, organised by US Living and Learning was very ably led by Rabbi Aubrey Hersh, Senior Lecturer at the JLE, along with our very own Rabbi Daniel and Rabbi Ephraim Guttentag from HGSS.

Having retired a few years ago, it is only occasionally that I have had to get up at ‘stupid o’clock’ in the morning but now, after the event, I am so pleased that I made the effort to do so on that Sunday morning. Along with the other members of our almost thirty strong group, we assembled at the crack of dawn at Stansted Airport for our early morning Ryanair flight to Berlin. This, coupled with a late night return flight, albeit to Heathrow the following evening, ensured that we had two very full days in a City in which a Jewish Community has featured since 1295, but which has endured a tumultuous history ever since, particularly during recent times.

It was not only the Jewish Community that has suffered and this was starkly illustrated during our first visit which was to the Berlin Wall Memorial, a section of the Wall that has been retained as a reminder of the division that existed after1949, when the Soviet Union blocked road access to Berlin; West Berlin became part of West Germany whilst East Berlin became the capital of communist East Germany. The Wall itself was constructed in 1961 by the GDR almost overnight, using barbed wire initially, to prevent East German citizens reaching the more prosperous West Berlin which was administered by the Americans, British and French. The wire was hastily replaced by more robust reinforced concrete, approximately 3.5m high, with a wide ‘death strip’ adjacent. Manned watchtowers, one of which remains, prevented people reaching the West and thousands died in their efforts to do so. Flats adjacent to the Wall had their windows bricked up to prevent people jumping out of them to escape to the West and when they continued in their attempts by jumping from the roofs, those blocks were demolished. Some harrowing photographs and stories are featured in an exhibition centre we visited which overlooks the retained section of Wall, complete with an original watchtower.

The Wall, which was finally dismantled in 1989 isolated West Berlin and was approximately 127 miles long with just three checkpoints which enabled access to and from West Berlin for both Germans and non-Germans. These were Alpha, Bravo and probably the most famous of all, Checkpoint Charlie in the American Zone and which we visited later in the trip. Unfortunately it has become more of a tourist attraction than a reminder of the hardship suffered by the City’s people. After the Wall’s removal, East Germans streamed into West Berlin.

The Bundestag is the national Parliament of the Federal Republic of Germany, the seat of which is the Reichstag Building. Walking up the perimeter spiral ramp of the Norman Foster designed glazed dome that was built above the Plenary Chamber in 1991, visitors enjoy spectacular 360 degree views over the City. From here, we were able to see all the major landmarks which included the nearby Brandenburg Gate, which was a symbol of the division of Berlin and Germany until 1989, after which it became a symbol of German unity. Further afield is the Holocaust Memorial comprising 2,711 concrete blocks of varying height, designed by Peter Eisenman. Apparently, he had intended to feature just 2,700 slabs but, due to an oversight, an additional 11 blocks were incorporated……….happily though, there are 2,711 pages in the Talmud and the final outcome is considered to be more fitting. In the distance, we could make out the gold domes of one of the oldest shuls in Berlin rather inappropriately called The New Synagogue on Oranienburger Strasse, Completed in 1866, this was the only synagogue not destroyed during Kristallnacht but, ironically, was severely damaged by Allied bombing in the Second World War; the façade was saved and the rear was rebuilt in the 1990’s as the Centrum Judaicum. We visited all of these landmarks during our visit, as well as the site of Hitler’s Bunker which was sealed off and a block of flats constructed above……the block itself doesn’t feature any basement apartments!

We spent some time exploring Daniel Libeskind’s Jewish Museum. Its architecturally striking zinc clad exterior with ‘slash like’ windows houses a series of connecting voids, each of which is a sensory experience in itself and this is heightened by the use of natural daylight and sound. One of the voids is devoted to the everyday lives of secular and religious Jews but, unfortunately, that part of the Museum detailing the history of the Jewish people in Germany is currently being refurbished. On arrival, our party was split into two groups with a Museum guide allocated to each one; without a guide, I personally felt that it would be difficult to fully appreciate the meaning of every aspect.

Whilst we did a significant amount of walking, we had the benefit of a coach to take us from venue to venue and down some of the well-known streets such as Wilhelmstrasse, named after King Frederick Wilhelm of Prussia who died in 1740 and which, prior to 1945, housed some of the principal Government offices such as the Reich Chancellery and the Foreign Office. We also saw Unter den Linden, a famous boulevard running between the City Palace and the Brandenburg Gate and which is lined by lime trees.

Two of the most significant visits we made were to the Bavarian Quarter and the Wannsee Villa. It was in the Bavarian Quarter where the second largest concentration of Berlin’s Jews, including Albert Einstein, lived, all of whom felt fully integrated into German society at the time. However, in 1931 and thereafter, decrees were progressively issued which denied Jews their rights with pressure gradually being increased such that many committed suicide when their identity was challenged. This progressive ‘ratcheting up’ of economic and emotional pressure is graphically depicted by 80 signs affixed to lampposts throughout the Quarter, designed and placed by a Jewish and a non-Jewish artist in 1993. We saw a number of these chilling signs which illustrated decrees ranging from the fact that Jews could only buy food between 4 and 5pm, when little was left to purchase, that prohibiting Jews from joining choirs so as not to pollute their fellow choristers to the decree that non-Jews may not be treated by Jewish doctors as well as the freezing of Jews’ bank accounts.

It seems impossible to imagine that something so horrific was discussed in such a beautiful location, but that is exactly what happened at the Wannsee Villa, a rambling lakeside house in an exclusive suburb to the west of Berlin. Used as a conference centre by the SS from 1941, it was here, on 20th January 1942, that fifteen high ranking representatives of the SS, the NSDAP and various ministries met to discuss the implementation of the Final Solution to the Jewish Question. Known as the Wannsee Conference, it was chaired by Reinhard Heydrich, Head of the Reich Security Main Office (RSHA), the agenda for which was drawn up by Adolph Eichmann, Heydrich’s deportation expert.

The Wannsee Protocol documents which were found in 1947 in the foreign ministry files detailed with alarming clarity the plan to murder all of Europe’s Jews with the active participation of Germany’s public administration. They estimated that this amounted to approximately11 million people and included those living in the UK and Ireland.

The ground floor rooms house a permanent exhibition entitled ‘The Wannsee Conference and the Genocide of the European Jews’ and this documents the prehistory of the National Socialist persecution of Jews, the process of exclusion, deprivation of rights and expulsion between 1933 and 1939 and the deportations, confinement to ghettos and murder of the European Jews in German-controlled territories. The conference delegates met in the former dining room and the chilling exhibits on display describe the evil events that took place there almost 80 years ago. Along with the others, I found it hard to imagine that such a horrendous plot, one to eradicate all of Europe’s Jews, was hatched by supposedly ‘educated’ people in such idyllic surroundings.

We also visited the Old Jewish Quarter in Berlin where Jews have lived since 1671 when the first two families were granted residency privileges; this followed the expulsion of all Brandenburg’s Jews ‘for all eternity’ in 1573. We saw the Jewish ‘free’ school and the Jewish cemetery which was partially built over by the Soviets and is now sadly overgrown.

We walked around the Humboldt, formerly the Friedrich Wilhelm University buildings where many famous Jewish scholars had studied. However, the Nazis changed all that and under the Law for the Restoration of the Professional Civil Service, 250 Jewish professors and employees were fired from the University during 1933/4 and many doctorates were withdrawn and students ejected. Opposite the library building in Bebelplatz, 20.000 books by ‘degenerates’ and opponents of the regime were burned on 10th May 1933 and a glass covered void in the pedestrianised area with rows and rows of empty bookcases below, is a stark reminder. An adjacent plaque bears the words of Heinrich Heine in his work of 1820 in which he stated – “This is but a prelude, where they burn books, they ultimately burn people”. How true and chilling is that?

On our trip, there was never any shortage of food. From an endless supply of snacks and water on the coach provided by Rabbi Hersh, to sit down lunches and evening meals kindly provided by both Chabad and at a Girls’ Seminary. Our hotel, The Leonardo Royal was very pleasant and we arrived there early enough at the end of an exhausting first day to enjoy a couple of drinks in the bar before a much needed sleep.
At lunchtime on the second day a guest speaker, Danny Fabian, described life as an orthodox Jew in Berlin today. Before the War, about 160,000 Jews lived in the City, one third of Germany’s total. Of those, 55,000 were murdered, 7,000 committed suicide, 90,000 emigrated and 8,000 were liberated. The population has increased both naturally and through immigration since, mainly by Soviet Jews and Israelis, many of whom live in Berlin as it is cheaper to do so than in Israel. He spoke at length about the rise of the right wing AfD and the threat posed by anti-Semitic immigrants. He did say that he felt safe in all but a few areas of the City but a constant reminder that a potential threat exists is the sight of Police stationed outside synagogues.

Our visit drew to a close with a final meal at Chabad after davening Mincha in their beautiful shul followed by a hasty exit to Tegel Airport for our BA flight home to Heathrow. As you can imagine, many questions remained unanswered at the end of our visit, not least of which was…….. WHY?

One question of much lesser importance but which has perplexed me for some time, particularly as we had three rabbis in our party, is what the collective noun is for a group of rabbis. Rabbi Hersh and I considered this, (albeit very briefly), and finally agreed that a ‘Rabble of Rabbis’ would be appropriate…………..Well, there you have it folks, that’s official!

Finally, I would like to thank our three Rabbis and the US for arranging such an incredibly interesting visit………..it really made the early start so worthwhile!