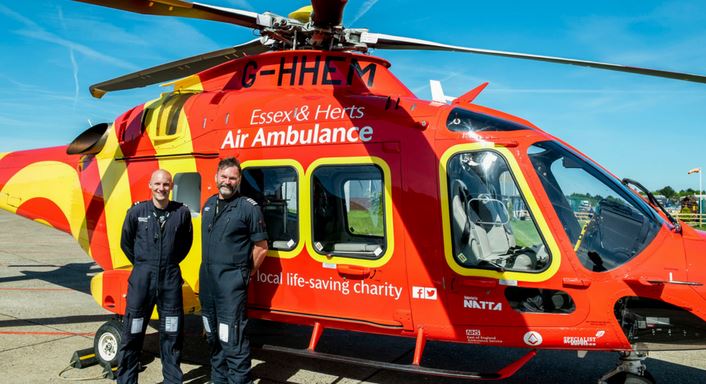 February 14th, 2021 | News & Events It’s an expensive business being “heroes of the skies”

“It costs £25,000 a day to keep the Essex & Herts Air Ambulance operations going”, volunteer Peter Hennessey told St Albans United Synagogue members during a Zoom presentation at which he spoke about the life-saving work that the charity undertakes seven days a week and, latterly, 24 hours a day. Which meant that the immediate donations for the evening were enough, worked out our in-house mathematician, Rabbi Daniel, to fund the organisation for just seven minutes!

Further pledges of support were definitely on the cards, however, as audience members heard more about the history, aims and activities of the Air Ambulance Service, which receives no direct government funding or National Lottery money. Instead, it relies almost entirely on the generosity and goodwill of the residents of Herts and Essex to provide the advanced on-site medical care that can make a life or death difference.
First set up in Essex in 1998 as a pre-hospital emergency medical service , the organisation expanded ten years later to cover Hertfordshire, and while its two helicopters and four rapid-response cars are still based in Essex, they aim to reach a patient anywhere in the two counties within 15 minutes. “Cars?” you may ask. “I thought it was all about helicopters”. But these are cars with a difference. Equipped, like the helicopters, with enough kit to turn them into a mobile A & E department, and also staffed, like the helicopters, by a specially-trained pre-hospital care doctor and critical care paramedic, they can be used at night or in bad weather when taking to the air would be dangerous. The helicopters, on the other hand, can land where access would be impossible for wheeled transport – the middle of a golf course is just one example of where they are summoned! Of the 210 missions undertaken last December, however, only 52 involved the helicopters, while the other 158 were dealt with by the rapid response vehicles.

So what kind of emergencies do they attend? It’s a 50/50 split, said Peter, between medical emergencies, such as heart attacks, strokes and other life-threatening events, and trauma, which covers road traffic collisions, falls, industrial accidents like severed limbs, severe burns and so on. Both helicopters and cars carry supplies of blood, drugs, medication and even an operating table for emergency surgery. Surprisingly, after initial treatment, only 30 per cent of patients are flown to an appropriate hospital, with the remainder taken on to the nearest hospital by ordinary ambulance.

The red and yellow striped Essex & Herts helicopters are no longer an unfamiliar sight when we look up. And when you think of both the human as well as the financial cost of providing the kind of service we have come to expect, these guys really are “the heroes of the skies”, as Peter’s talk was titled. And as our chairman, Elissa Da Costa-Waldman, put it: “We should really appreciate what they do, because one day, the life they save, may be our own!”

If you’d like to make a donation to the Essex & Herts Air Ambulance Service, or sign up for their weekly “Flight for Life” lottery draw, go to: www.ehaat.org

Facing up to wildlife – SAUS award-winning photographer reveals his secrets

Our Zoomed Holocaust Memorial Day – truly “a light in the darkness”